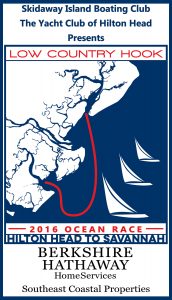 This ain’t no fish tale!

We threw the hook over the side, and we caught a big one! The inaugural
Hook Ocean Race of 2016 was an enormous success with 19 boats entered and over 165 dinners served up at Landings Marina park.

This sponsor-driven race had momentum as soon as Berkshire Hathaway HomeServices, Southeast Coastal Properties signed on as lead sponsor. More than 15 other companies also came onboard to support this new annual tradition.

Even a short ocean race is inherently different than sailboat racing on a river! While 19 sailboats headed to the start line outside Hilton Head Harbor, winds, equipment and seasickness took a toll. Thirteen boats were scored as finishing the race. One boat dropped out due to equipment failure and another sailboat dropped out to provide assistance. Several boats did not cross the finish line before the End of Race horn (a time limit is set for finishing the race). Landings Harbor Marina accommodated most of the visiting boats and a couple sailboats anchored outside the marina while the crew came in to dinner.

While the racers enjoyed 15 knot winds and 3 to 4  foot swells, the Land Committee, more than 10 SIBC members, worked in the heat of the day setting up tents, tables and decorations at Landings Harbor Park! Barnes set out a yummy buffet and over 170 members, guests and sailors enjoyed a breezy, comfortable and festive evening.