Our 2nd annual “Burn” was a resounding success! At least 60 hearty
members and guests braved 50-degree temperatures (in Savannah, that’s cold!) to maintain the tradition.

Between the fire in the fireplace and the fire-on-a-post, we all stayed warm – and well fed on appetizers-to-share.

The tradition began when one boater made a snap decision to burn his grubby winter socks as he cleaned up debris left over from the winter. Today the “sock burn” is a celebration of the equinox and/or the beginning of the boating season.

Our fire roared when Roger tossed in the socks! 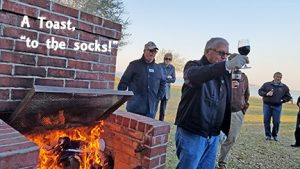 Not only were our toes ceremonially “released from their winter clothes“, but those old socks served once again to keep us warm!

SIBC has improved on the tradition! Besides ‘a sock to burn’, our members brought packages of new socks to be donated.  300 pairs 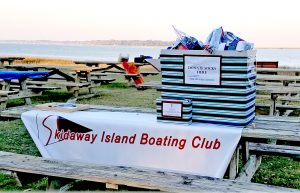 of new socks were collected and will be donated to Chatham Savannah Authority for the Homeless . (See “The Story of the Burning of the Socks at our website).

A Blaze of Socks!

A New Annual Award – After the sock burning our Commodore, Lee Carroll, and the new Rhodes 19 Fleet Captain, Mark Winters,

presented, for the first time, the “Marty Vernick Sportsmanship Award. This annual trophy will be “Presented to the sailor who displays exceptional values of sportsmanship and contributes to the sport of sailing on Skidaway Island”. The recipients’ names will be permanently affixed to the base and the trophy will be on display at Landings locations throughout the year.

This year the trophy was presented to its namesake,
Marty Vernick, to honor his 13 years of dedication and service to The Landings Rhodes 19 Fleet. 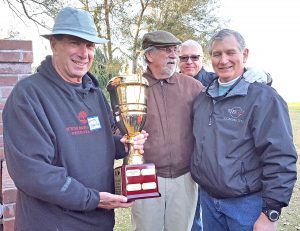 Marty has spent untold hours and effort in the creation and maintenance of this wonderful Landings Club amenity. He is responsible for the where the club is today!

Marty passed the captain baton to the able and enthusiastic hands of Mark Winters,SIBC member and new Captain of the Rhodes 19, Fleet  49.

The fleet races each weekend (weather permitting!). Go to Rhodes19 to learn about your opportunities to
join your friends out on the water! (https://skidawayislandboatingclub.org/rhodes-19/). 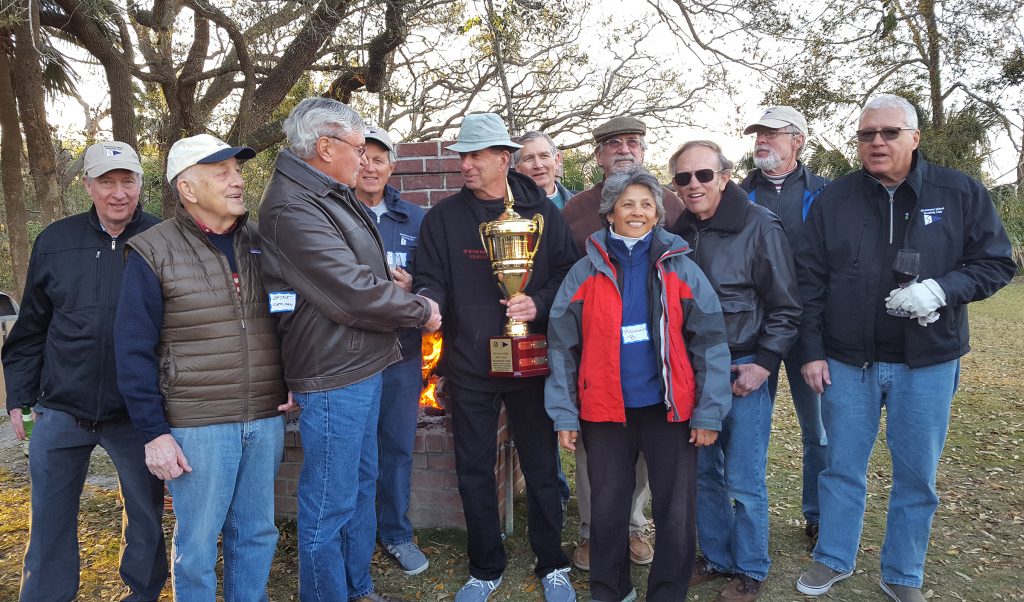 SIBC – What it does best!

[Learn about the Rhodes 19 Club and look at pictures of the boats in action by following this link:  Rhodes 19]


The Story of “The Burning of the Socks“ Ceremony
Skidaway Island Boating Club is again joining boaters around the country in the annual “Burning of the Socks” ceremony. Northerners time their sock-bonfires to match the spring equinox, the end of winter, and the beginning of a new boating season.

Unlike the sad Northerners, here on Skidaway Island we enjoy boating year round! Still, we are happy to join in this traditional celebration, in our own SIBC-style.

In addition to bringing an old pair of winter socks to ceremonially burn, (“Release Your Toes from their Winter Clothes!”), members also bring packages of new white athletic socks to donate to Chatham Savannah Authority for the Homeless!

The start of this tradition is credited to Bob Turner – in an Annapolis, Md boat yard. Per boating lore, Mr. Turner spent winters “OPB”, (working on “other peoples’ boats”). By the end of the winter, Captain Turner had a collection of boatyard debris: dried up varnish, fiberglass repair leftovers, old grubby socks and … other stuff.

The legend reports that one spring day Bob headed out the pier to dispose of an armful of assorted stuff, when the lovely spring day inspired him to shed his socks.  (We all know that boat shoes wear better bare-footed!). He was further moved to douse his socks with lighter fluid and set them on fire in celebration of his toes release! This was the first sock flambé, and the beginning of the celebration of “Releasing your Toes from their Winter Clothes!”.

The director of the Chatham Savannah Authority for the Homeless, Cindy Murphy Kelley, has told us that we should be sure to collect white, cotton, athletic socks because they wear well, keep feet drier, and in the event of infection, show wounds better than black socks. Wet feet and resulting disease/infections are a special and prevalent problem among homeless people. More information about the Chatham Savannah Authority can be found at http://homelessauthority.org/.