Don’t forget to send your pictures and information to siboatingclub@gmail.com!

The Labor Day Cruise started strong with six boats signed up to overnight in Wassaw Creek, however, Mother Nature’s unpredictable summer afternoon thunderstorms made selecting a good weather window for over-nighting difficult. Instead of cruising together, those who signed up went their own ways to enjoy the Labor Day Weekend.

So, it turned out to be a great boating weekend and almost all who originally signed up to cruise went out… just not together. We all agreed to reschedule overnighting on the south side of Wassaw Island when the weather is cooler and more predictable.

Hosted by the South Carolina Yacht Club, on Hilton Head 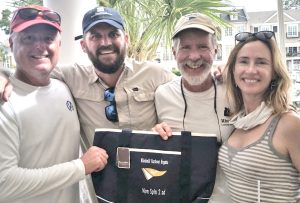 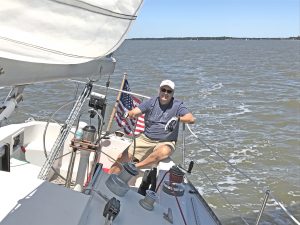 SIBC member Paul Reddick, aboard his J-100 “Blu J”, took 2nd place in the PHRF class sailing his J-100,  “Blu J”.  SIBC members Jake Master, Mark Winters and Joe Witten crewed. The Blu J team (including Ed Owens) took 3rd place overall in very tight races in the Spinnaker Class. The results came down to a tie-breaker between 2nd & 3rd. Blu J did cross the line 1st in 3 out of 4 races over the 2-day regatta.

It was sunny and very blustery both days, with winds blowing 15-18, and occasional heavy gusts on the last weekend in April. In the final race Sunday, a particularly strong gust hit them from behind. With the main-sail fully out and the spinnaker flying, Paul’s boat rounded up and heeled sharply over to port. Crew member Ed Owens said “I just got my toes on the rail, and they were ankle deep! 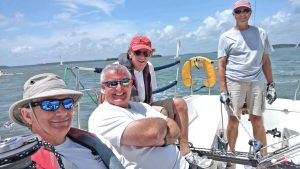 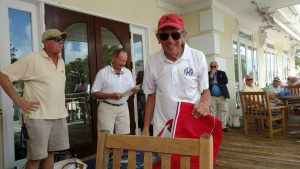