Tour R/V Song of the Whale in Savannah 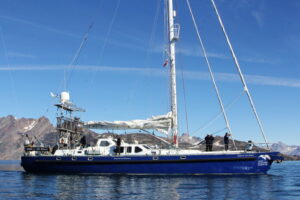 R/V Song of the Whale arrived in Savannah on January 27th at Rousakis Plaza on River Street. Having sailed from the U.K. to Fernandina Island in Florida, she will follow the migration of the North Atlantic Right Whale from their calving grounds here in the southeast up to Canada, working with leading North Atlantic right whale researchers to address data gaps fundamental to the survival of the species. IFAW commissioned the vessel in 2004 to provide an offshore platform to enhance monitoring and research efforts of marine mammals, particularly whales. The Song of the Whale is a 21-meter sailing vessel, purpose built to be the quietest research vessel in the world.

SIBC is kicking off its membership renewal drive for 2023 starting December 26th and ending January 6th.  In order for you to vote on the new slate of SIBC officers and directors in January, your SIBC membership must be up-to-date.

Household memberships are still only $75 and single memberships are only $50.  SIBC Membership is one of the best values for the money at The Landings and our prices are holding steady even in this inflationary economy.  Your investment in a membership to SIBC is one of the most inexpensive ways on Skidaway Island to meet like-minded boating enthusiasts, to enjoy social activities on and off the water and to learn more about boating in the Low Country.

The SIBC Social Committee has been working hard to develop exciting activities for calendar year 2023 based on the feedback we received from our members survey and we don’t want you to miss out on any of these exciting activities.  The SIBC Board has increased the number of on the water events, social events and learning opportunities in calendar year 2023…so don’t miss out!!  The final schedule of events for 2023 will be solidified in late January or early February.

Navigate to the Membership Application page to pay for your membership with PayPal.

Hope to see you at one of our events…

Posted in Latest News | Comments Off on 2023 Membership Drive

Please find attached the Commodore’s Log for the month of December.

Please find attached the Commodore’s Log for the month of November.

Posted in Latest News | Comments Off on November Commodore’s Log

Commodore Hugh Upton presented donations of $2,000 from the Skidaway Island Boating Club and $500 from the Chatham Sailing Club (CSC). CSC was donating a portion of the sponsor proceeds from the Low Country Hook Ocean Race and could not be in attendance due to a regatta on the same day.

Please find attached the Commodore’s Log for the month of October.

Posted in Latest News | Comments Off on October Commodore’s Log

A Beautiful Day Playing With Dolphins

Posted on October 30, 2022 by sibc
Posted in Latest News | Comments Off on A Beautiful Day Playing With Dolphins

Below is a link to the Year End Bash Photos

Please find attached the Commodore’s Log for the month of September.

Posted in Latest News | Comments Off on September Commodore’s Log

There is no better place for boating than the Low Country of South Carolina and Georgia, and it has been a popular spot for sailing for generations. The Low Country Hook Ocean Race regatta offers sailors a unique experience with a course that resembles a large hook, hence the name. The Hook Race is the only open ocean water sailing event in the Low Country. While many area boat clubs host annual regattas in inland waterways, the Hook offers the opportunity to compete in open ocean waters for several hours which historically was a large part of sailboat racing.

This year, SIBC hosted a Dockside bar event for members, sailors and spectators. With the last to finish at 3:45 PM, the Dockside bar was bustling with sailors telling the tales of the day. One sailor likened the time in the ocean to being in a cement mixer. Many thanks to Dianne & Paul Bloom who served as bartenders for the event.

This year there were 21 boats at the starting line. With a strong favorable breeze and tide, the first to cross the finish line at Landings Harbor was High Visibility, a Savannah Yacht Club J/105, finishing with a corrected time of 3 hrs 33 minutes. This was the fastest Hook Race and a wild ride for competitors that flew spinnakers south past Tybee Island. A Landings Harbor  J/24, ROGUE, finished with the second best corrected tine of 3 hrs 34 min. This also placed her at the top of the J/24 class. The non-spinnaker class winner was Shazam, as 28′ Beneteau from the Chatham Sailing Club. The cruising class winner was Merlin, a 30′ Pearson from the Chatham Sailing Club. The Landings Sailing Club’s J/24, Bonnie Blue, captured a 3rd place in the J/24 class.

Photos of some of  the finishers can be seen with the link below.