mar Patel and Paul Reddick are famous for contributing their sail adventures to our newsletter, Skidaway Soundings (Team TAP et al) . This saga is their tale about purchasing their second jointly owned J-boat,  (and the 3rd boat in Paul’s 2016 J-fleet).  The icon to the left is linked to the history page for “Star Eyed Stella” – mjm editor 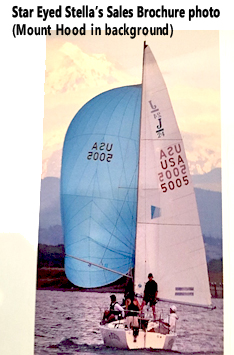 As many club members know, we are joint owners of a J22 sailboat we sail out of Landings Harbor. Since there are no other J22’s active in the area, we race the boat in PHRF races where dissimilar boats race together and their elapsed times are adjusted using a handicapping system.

It so happens there are three J24’s in the Savannah area, so we set the objective of building a one-design J24 fleet here. If we get 5 boats, we will have a “Fleet” and we can hold sanctioned “one design” races needing  no handicapping system.

Thus it came to pass that we decided to purchase a J24. We searched the online boat sale sites and found lots of J24s – it is after all the most popular one-design sailboat in history with over 5,300 boats out there. [First boat was built in 1975, see History ].

The boat that really caught our eye was a boat called Star Eyed Stella, Hull Number 5005 [5,005th built], conveniently located in Portland Oregon. It is a very well maintained boat owned by a long-term perfectionist owner. It also has a strong race record.

After some negotiation, we entered into a contract on the 4th of April. All that remained was to check out the boat, sail it, and get a surveyor to provide an expert examination. That required a trip to Portland Oregon. Now Portland just happens to be one of the coolest places on the planet, and neither of us had ever been there. So despite the derision of our friends who thought it amusing that we would stray so far from home to buy a boat (you know who you are!) we were eager to go check out the town as well as the boat. And on April 15, we flew out and our travelogue begins.

April 15: After a quick 8 hour hop on Middle Seat Airways, we landed in Portland. We picked up our rental, a little Mercedes SUV with the gear shift in the wrong place so that when you try to back up the windshield wipers engage. We got a funky VRBO house in the heart of the “Pearl District,” which is where all the action is. First stop is Rogue, a craft beer palace with 25 taps including a great draft called Good Chit. Good tacos too. It’s now after midnight body time so we crashed in order to be up and see the boat first thing tomorrow.

April 16: We went out to find breakfast and instead found a parking ticket ($44!!). They don’t like cars in Portland. Made it to the marina, on a cove off the Columbia River with snow-covered Mount Hood majestically overlooking everything; fresh water, about 80 miles inland from the Pacific. We had agreed that we would likely know in the first 5 minutes if this was the right boat. It was. Immaculate, lots of little rigging and fitting details the owner had invented and implemented. And a sail inventory of 9 sails in great condition.

We also met the owner, Craig Garrison, who is a real character. One of these free spirits who has been all over the world, done all kinds of jobs, and invents and engineers things in his garage. He’s selling the boat prior to going to China for his next gig.

Back to Portland to meet Sapna, Amar’s doctor-cousin who came down from Seattle to visit. We had a great dinner with some of Sapna’s doctor-friends at a very good Thai place. Good to know if you choke or have an allergic reaction, medical help is instantly available. Tomorrow we go to sail the boat. It will be Sapna’s first time on a sailboat. 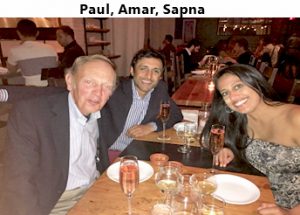 April 17: We went out in the boat today. First obstacle was the current. They open the dams upriver to release the snow melt and it comes honking down at 5 knots!! We went crabbing [sliding sideways] down the cove toward the river with the sails full in the 15 mph breeze, the little 2 hp Honda groaning, and barely made it into the river. Paul asked if there was anywhere where there was a risk of running aground. Answer is “no, but what you do have to look out for are these logs…there’s one!!” They break loose upriver and come flying down at 5 knots, looking like a surfaced enemy submarine, and capable of knocking an 18” hole in your boat.

Sapna is a really good sport. She enjoyed sailing despite the vicious heel [tilted at an appalling angle]. We have a long lunch in the warm sun at the picnic table outside the marina, giving Craig a chance to regale us with half a century’s worth of stories.

Tonight is our last evening with Sapna. We have a fabulous dinner at the Mediterranean Exploration Company. Do not visit Portland without going there.

Sapna announces her choice for a name for the boat: Rogue. It has a Portland connection and is a little edgy. Perfect! Craig had said we could keep the name Star Eyed Stella but said we must google it first. Google it yourself and you’ll probably agree with our decision to change the name: Stella is a drug -addled vampish rock n roll singer in a countercultural comic book done by one of Craig’s friends in San Francisco – not for a family marina.

April 18: Today is the survey. We meet Pat Devlin who is VERY thorough. No major issues came up, so we close the deal and enjoy a late lunch before making our way to the airport for the red-eye flight home. Uneventful except for an exasperating 40 mile roundtrip up into Washington state to find a gas station – none anywhere near the airport. Note to future Portland visitors: buy the gas option.

After getting home, the challenge is getting the boat back east under some arrangement that doesn’t involve the Panama Canal. We discuss the job with what seem like a dozen different carriers. All we need is a heavy-duty pickup to pull our trailer to Savannah. We finally settle on one outfit that picks up the boat on May 8. We begin texting and calling to track our boat’s passage east. There are a few minor excitements. Bearings require re-greasing in Wyoming, tornadoes chase our boat in Nebraska, (It’s hard to picture the J24 in Nebraska.) Finally the boat arrives at Landings Main Gate about midnight on Thursday night/Friday morning. 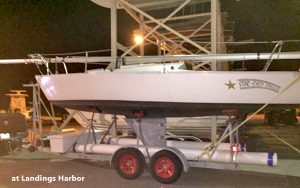 Home in Savannah!!! Midnight May 12

We’re excited to have her here and looking forward to getting her rigged and racing! Stop by to see the boat at Landings Harbor Marina. She’s two down from our J22. And the J22 is for sale!